maggie2年前
Very excited for this review! I thought this set would be just perfect, and I do think it's very close. My intent was to have a relaxed lived-in room that would work for a common setting, and specifically for a room for Saitama.

Re-ment Puchi Series Slovenly Room ENTRY #147772 is a set of 8, priced at 550Y per box (or a set for less), and can be purchased from the usual places like HLJ, Hobby Search, Rakuten and Amiami. The theme is a sloppy room, and this room definitely seems to skew towards a single girl who has good intentions but perhaps is too lazy to follow through.

So let's dive in and see how this set sizes up! Pun... intended?

This is a table, drink in container, drink in a glass, remote, magazine, and ramen with pot and chopsticks. Kind of funny that the ramen is being eaten directly from the pot, probably the first time I've seen this in a Re-ment set as it's usually in a bowl, how lazy! The chopsticks attach to a hole in the ramen, so they kind of float there waiting for a Figma hand to grab it. I'm surprised in the small details: the cap comes off of the drink and the remote has such tiny buttons! The buttons don't have print on them but let's just say they're worn out.

Does it work with Figmas or Nendoroids? I'd say both! A touch big for nendoroids but definitely doable, better sized for figma perhaps. The drink container is huge, but in all honesty, I saw some pretty large green teas and the like in Japan so I'd assume you could find a giant gallon one at least.

This set has a TV with removable front, 2 optional screen shots, DVD rental case, DVD, potato chips, bag, and a soda. Fantastic set. Sizing can work with nendoroid or figma perfectly. The TV is wonderful, and I'm tickled pink the DVD says 'What's Your Name' which is obviously a play on 'Your Name.' The DVD even slides into a slot on the TV! The chips actually have a very well sculpted bag, definitely gives me that bag feeling, which is an odd thing to say.

Does it work with Figma or Nendoroids? Yes! Both!

The laundry set has a hanger with little clips, panties, a bra, a night stand, a dying plant, a "goki buster" spray, and wipes. I'm not sure what the spray or the wipes are, perhaps someone more fluent than I am can help! After warping the panties into an open position, they seem like they could work for a female figma, and the bra hilariously works for figma sizing as well. This set came with a papercraft of what looks like a wedding invite and a RSVP card.

Does it work with Figma or nendoroid? I'd say yes, Figma goes a little better but everything would mostly work in a nendoroid setting.

This set is titled grooming and includes contact lenses, curling iron, pink container, BB cream (lol), hair spray (?), body mirror, lipstick. Lots of small details... the curling iron does open and close, the plug fits in with the power strip from another set. The lipstick has a cover to fit on it, the BB cream and spray comes preprinted so no stickers which is fantastic. For the contact lenses, you can take off the caps for each side.

Does it work with Figma or nendoroid? So-so in this case, the mirror is great for Nendoroid, a true full body, but not large enough for Figma. Lipstick is large for a nendoroid, but the other items seem to be able to work in a setting for either.

A fitness set, but I'm not sure why it's called that entirely. It comes with equipment for sit ups? I'm not sure what it's for really. It has a shirt draped over it which is rather useless, and a pink purse. What I do like a lot is the swiffer mop, the tissues, and the manga. Who can't use some books in a photo shoot for their toys?? The tissues I had to make my own and put them in there, maybe I missed something in my box.

Does it work with Figma or nendoroid? Kind of. The workout equipment was extremely hard to put the Figma on, it doesn't work at all. It may work a bit for a nendoroid but the sizing overall doesn't complement either. The mop seems like it can work with either size, as well as the manga and tissues in a setting.

This set has toilet paper, two take away premade supermarket foods, a 3 pack of yogurt, plastic shopping bag, curry box, Puchi market shoppers card, receipt. I couldn't quite get how to put the plastic on the toilet paper, and I think I almost like it better out of the package. The curry box, receipt, and card you need to cut from the flier and papercraft them yourself. I'm amazed by the tiny printing and detail, the small stickers that go on the food are so great!!

Does it work with Figma or nendoroid? I think these could all potentially work, with the exception of the bag and the curry box. The curry box would work just fine in a background or on a shelf, though!

Online shopping! Who here can't relate to that?? This is where I get a little confused about how this isn't a fitness set. You get a puchizon mock amazon cardboard box, a fitness drink container and 3 drink packets, a pink laptop, an exercise ball, and a massager. I didn't put the sticker on the laptop showing that page for the exercise ball so I could put in other screens myself.

Does it work with Figma or nendoroid? Yes! I think everything here has the potential to work with either, especially in a setting. I do think it's a bit better for Figma but I've seen some larrrrge exercise balls, shake containers, laptops and of course cardboard boxes!

Time for bed!! This set comes with a bed, rumpled blanket, plush bunny, pillow, power strip, phone with charging cord, volume 4 of the 3 other manga but opened, puchi spray bottle (febreeze?). The bunny is supposed to go under the covers, and there's an open space for it, but when I look at the set photograph it doesn't seem like you need to put anything under the covers at all, and can use it strategically if you want to put anything underneath or not. The plugs actually fit in the power strip! What fun!

Does this work with Figma or nendoroids? The bed works well for nendos, as you can see. I like that it doesn't have a frame to it so it has that futon modern minimal feel to it that you see in so many anime bedrooms. However, too small for Figma. The phone is good for Figma but a bit large for nendoroids, but with how large phones are it could almost be an ipad and I'd call it acceptable.

This set is exactly what I wanted, and I'm glad almost everything works for both sizes! It's kind of a magical moment when you get such a versatile re-ment set. I used a similar set up for the Figma and Nendoroid, just switched a few things, so you can really see how well the Slovenly Room set works! The background and floor is from the box that held the set, so don't count that out, do all the paper craft you can make use out of, for sure. I know I'll be reaching for this set a lot, mostly for the bed, TV, night stand, and table among other things.

Maakie
This set is just way too adorable! A 'sloppy' room, haha! The electricity outlet with the phone charging is probably my favorite part! But the super good looking sculpted bag of chips a close second. :)
2年前

Okeno
That’s super helpful. Thanks!
maggie • 2年前 • #33888626No I don’t have any with Figmas, the fridge, counter, etc is just too big for them to make sense in my photos, personally.
2年前

maggie
Okeno • 2年前 • #33850654Oh wow! Thanks for the pic. Do you have any with figmas like Saitama? I get the sense that if it sort of works for 1/8, it's way too big for 1/12 as well. When I've googled it generally looks too big for 1/12-ish scale, but sometimes other pics made it look okay, so I've been really confused.
Thanks!

No I don’t have any with Figmas, the fridge, counter, etc is just too big for them to make sense in my photos, personally.
2年前

Okeno
maggie • 2年前 • #33839098DEFINITELY don't get the kitchen set if you're sizing for nendos!! I used it as a background with my 1/8 figures here View spoilerHide spoiler

to give you some idea. Getting furniture from full sets is much safer, but inevitably you're usually stuck with something barbie-sized (that's why this slovenly set works so well, most things are small!). I don't have the other 2 sets you mentioned, was considering buying the grandma's house set and another but I need to split it as I only want the furniture :-/
Oh wow! Thanks for the pic. Do you have any with figmas like Saitama? I get the sense that if it sort of works for 1/8, it's way too big for 1/12 as well. When I've googled it generally looks too big for 1/12-ish scale, but sometimes other pics made it look okay, so I've been really confused.
Thanks!
2年前

I already liked the idea when you posted those little crows and random trash and combined them with the little Haikyuu! figures....so yeah my desire to grab some mini stuff is growing!! ....and you're not helping one bit!!! LOL!!!
2年前

Super cute stuff!! Thanks for doing a review on them and sharing with us!! :D
2年前

maggie
Cantisama • 2年前 • #33840173This seems like the best Re-ment set yet! I like how much of it works with both Nendos and Figmas. And that Your Name tv, lol.
Thanks for sharing.

You're welcome! Yeah I love the nod to Your Name XD
2年前

broken-Toybox lump of laziness
maggie • 2年前 • #33840713yes that's the set!! It's a bit large though, isn't it? For nendoroid? I'm not sure I've seen it with figma
It is a bit large, especially the green table and he yellow chair, but it still kinda fits and you can work around that with some stuff from re-ment sets imo.
(Sorry for the bad picture-quality, I'll probly take better ones for my next lootpost)
View spoilerHide spoiler 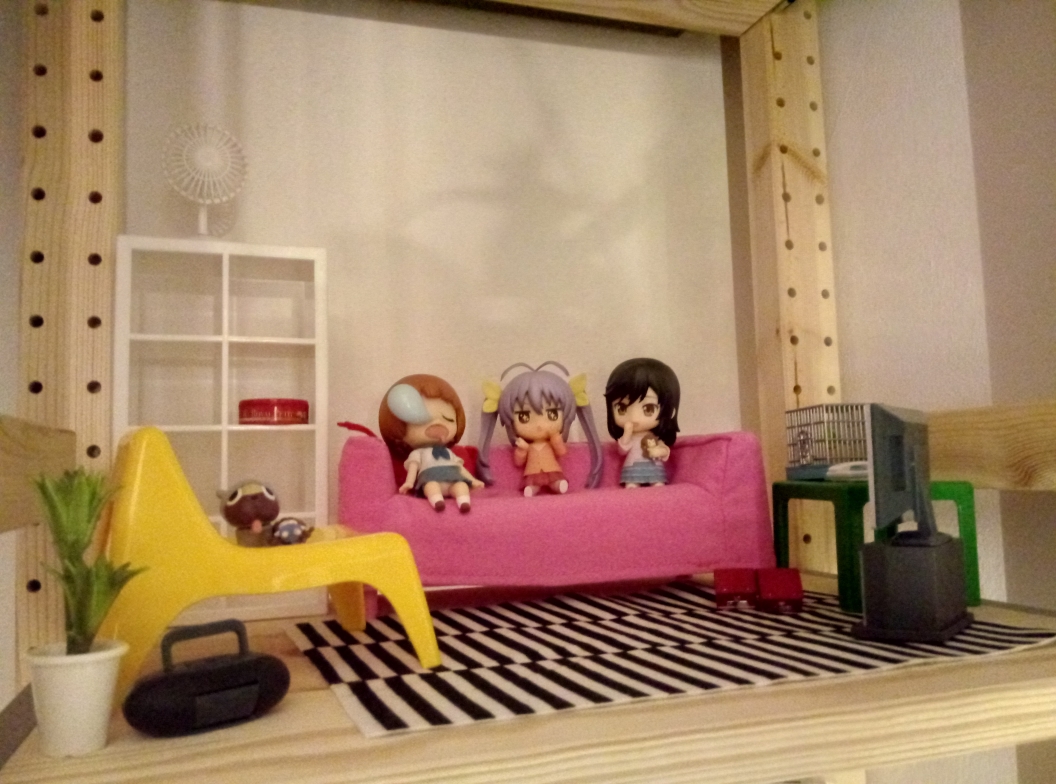