getting smoke smell off figures?Polls上一頁下一頁上一頁下一頁

Lumia8年前
this probably gets asked a lot but i can't find an answer to this particular situation.

i ordered ITEM #90156 online from a japanese seller and she just arrived today. i've bought from the seller in the past and the figures have been in great condition, but when i opened this box there was a pungent smell of smoke. it's an incredibly strong smell of cannabis. just being near the packaging can be overwhelming.

i really don't want this smell to affect my collection and my pets, so i put her away for now. i know there are guides out there but this smell is particularly bad. she's also quite dirty, so i guess she'd need a good clean anyway.

what's the safest and most effective way to clean her and remove the smell?

abi
comments in this old blog post helped me a lot: BLOG #5585 ... though I'm not sure about the smell you say, as it helped with regular cigarettes, but I hope it helps you too.
8年前

Riesz
MangoMilk • 8年前 • #2517661Though I've never had to try it myself, I've heard that vinegar works wonders in deodorizing small areas.
So you can put a bowl of it in a box with the figure next to it and it should suck out the smell after a little bit.

Baking soda and cat litter are two other great deodorizers. Put some baking soda or clean cat litter in a container then wrap the item in a cloth/paper towel or lay a layer of paper towels over top, and seal it up. Should remove the odours in a day or two.

I once bought a doll secondhand with a tobacco smell and I simply put her into a clean pillowcase then dropped her into a bag of clean kitty litter. I checked on her a day later and the smell was completely gone.
8年前

MangoMilk
Though I've never had to try it myself, I've heard that vinegar works wonders in deodorizing small areas.
So you can put a bowl of it in a box with the figure next to it and it should suck out the smell after a little bit.
8年前

Tiamat26
If there is any way for you to leave the box open at both ends in a out where it can get a lot of fresh air it will help to dissapate the smell. make sure its not raining of course or that it is extreamly humid. A nice cool day even winter time is good. That should get the smell out of the box for you . It can take a litle bit of time.

My issue was when I had my things in storage and there was a leek in the winter time. Everything smeelled like mold. the smell came out after 2-3 days of a nice country breeze as well as nice dish shop on the leather coutch which was what I was trying to save.

I have a garage attached to my home so I would personally put the box there where there is air circulation if I were in your shoes.

Moro
As much as I despise the smell of cigarettes (and I'm allergic to the smoke so that doesn't help) the smell of pot is 1000x worse. It's repulsive. I notice all the other comments seem to think yours has cigarette smoke since that's not uncommon but for something as pervasively nasty as pot smoke you'll have to do more extensive "purifying."

First, follow Wildstar's steps for washing the figure (for the soap, use regular old dish soap). Before soaking, gently scrub the soap all over the figure with a plastic paintbrush or an old soft toothbrush.
After all of that is done, once the figure is completely dry, take some dryer sheets--specifically, ones advertised with a "fresh" scent or something similarly neutral--and wrap the figure loosely in them. Put the figure in a cardboard box, then put this box near an open window or other area of air circulation. Leave it like this for at least a full day.
Rinse the figure briefly after removing the dryer sheets. If some smell still remains, repeat the process, but this time put the figure in a covered container with the dryer sheets. Again leave for at least a day.

After this, if possible, display the figure in an area with good air circulation to aid in dispersal of any remaining smell over time.
8年前⊛

Kawoshin More male figures, plz!
I've found that the smell fades over time, but if you must clean the figure I'd use the gentlest stuff possible.

In my experience lukewarm water and a light fluffing from a Magic Eraser does the trick.
8年前

Wildstar
Cigarette smell comes with the territory of collecting second-hand japanese goods.
It's not a big deal, you don't need to febreeze it or anything (though I suppose it could help), simply give it a bath with warm water and soap.
Let it stay in the vat for a day or so, then rinse and let it stay in the vat with clean water for another day. Then air dry. Repeat if necessary. Basically you do this until the water no longer smells of cigarette!

Nowadays I have to do this to almost every figure I get from japanese eBay sellers... In the end they end up smelling like plastic again... Mostly. On the "rubbery" parts it might be nigh impossible because they're porous and there's several years of smoke in there, but these are typically small or non-existent on PVC figures.
8年前⊛

Lumia
kngu • 8年前 • #2517090Febreeze her throughly, then rinse her with cold water.
I had the same issue with a used figure that I bought and found that this method worked.
Of course, the figure will smell like fresh laundry afterwards.
There's no real way of getting the figure to smell like plastic again, but it's better than the smell of nicotine.

what sort of cloth/sponge/etc would be the gentlest on her? the smell is much stronger than nicotine so i hope it still works well enough to get rid of it.

i'm a bit tentative to use chemicals seeing as i haven't cleaned in this way before, i'm kind of nervous that it could damage her and/or remove her paint TT_TT
8年前

kngu
Febreeze her throughly, then rinse her with cold water.
I had the same issue with a used figure that I bought and found that this method worked.
Of course, the figure will smell like fresh laundry afterwards.
There's no real way of getting the figure to smell like plastic again, but it's better than the smell of nicotine.
8年前 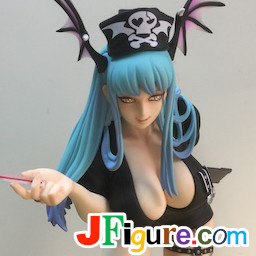